Young Inventors revel in success at Made in the Midlands awards 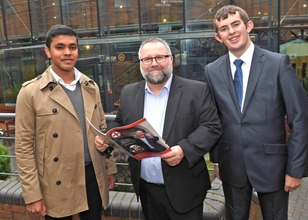 Central College Nottingham’s Brightson Xaviour Kalavilasam was recently crowned the winner of the Made in the Midlands Young Inventor Award at IET: Birmingham, Austin Court in front of respected directors and representatives of the Midlands manufacturing sector.

Brightson said: “It really was an amazing feeling, walking up on the stage you get nervous, but it was an overwhelming feeling that you have actually accomplished something great. Especially with all of the people from the industry out there, after looking at the companies as well, it was an honour to win the award.”

The Young Inventor is selected following a series of panelled presentations in colleges across the Midlands. At these events, students aged 16-19 have the chance to present a project they have been working on at college. The judges (manufacturing Managing Directors from industry) then provide constructive feedback.

Brightson and runner-up, Joseph Fitch delivered speeches in front of over 100 representatives of manufacturing and engineering firms in the Midlands at the ceremony. Last year, Central alumni Matt Smith and Chris Cahill were crowned joint winners. Following the awards, Made in the Midlands members, R A Labone hired Matt and he now works there whilst studying for his BA in Industrial Design at Derby University.

Brightson recognised the potential impact the award may have on his career, as he explained: “Getting the exposure in front of these influential people and being able to say I won the Young Inventor Award from Made in the Midlands sets me above the competition.”

Brightson and Joseph have recently completed their BTEC Diploma in Engineering at Central, which is where they entered the competition, and they were judged on innovation, originality and design.

Joseph praised Central’s Engineering Lecturer, John Wright for his support throughout the process of the competition, as he said: “He has been an inspiration, he was the one that helped me get onto the course at Central and he has been a brilliant tutor and teacher for my BTEC he has helped massively.”

Made in the Midlands are passionate advocates for the success of young people within manufacturing and engineering. East Midlands Regional Manager, Abigail Leachman said: “The Young Inventor award is a great celebration and showcase of the achievements of young engineers. The judges were very impressed by the quality of both Joseph and Brightson’s robotic vehicles. We look forward to working alongside Central in the future and we hope they continue their great work.”

Gavin Varley, Head of School for Technology at Central College Nottingham, said: “Getting involved in competitions like Made in the Midlands provides a great opportunity for our students to not only meet industry experts, but also to practise skills they will need in industry. For example they’ve had to keep to time schedules on the projects, work independently and present their ideas to real company directors. We’re very proud of all the students who took part.”