Shrewsbury engineering firm open their doors to schools and colleges 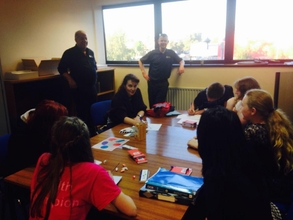 Salop open their doors to the students of Meole Brace Science College, Shrewsbury

Christopher Greenough, Director of Shrewsbury-based Salop Design and Engineering, one of the UK’s leading engineering firms specialising in pressings, assembling and coating, has long been a believer of giving back to the community.

“I’m always trying to make links with the local community,” Chris said "I've been searching for ways to work with the companies and institutions in the area to strengthen our current relationships and build new ones."

A few years back Salop Design saw that their local college, Meole Brace Science College, was hosting a summer fair where local businesses could go and exhibit, allowing children and young people to gain an insight into the nature of local employment and a taster of the working world. Speaking to one of the teachers, Chris suggested that the students should visit the Salop factory nearby to show them the premises, equipment and engage them with manufacturing as a future career choice.

“The only thing with getting kids into a factory is that you need to explain how it would be of educational value to the school”, Chris explained.

With education facing an increasing amount of cuts as the country works to eradicate its deficit by 2017/18, schools are wary of spending time and money on excursions for children without there being a quantifiable benefit for their grades.

Chris says this is just “one of the things we and the teachers have to battle with”, but earlier this July after hearing his idea, the science college agreed to have a trip to the Salop factory.

Staff at Salop gave the children a short induction, followed by a tour of the premises with some time taken to perform a number of practical activities working with the machines.

“You’ve got to put a spin on it to actually get kids interested - There’s no point just bringing them in and showing them round the press shop and saying ‘it’s a noisy environment, would you like to work here?’ because the first thing they’ll say is ‘no’." Chris recalls "What you have to do is show them that what they’re learning at school can actually be applied to a job in manufacturing”

Students were then given a piece of paper and laser cut shapes into the paper to find out how much material would be needed for pressing, as well as some basic maths the staff at Salop worked with scrap material to keep the kids engaged.

Due to the positive reception of this initial visit, Meole Brace Science College have agreed to send top maths students over for a few days to spend time in Salop's quality department to look at measurement reports and gain a better handle on how they can apply their school subjects to manufacturing and the world of work.

Despite the initial success of the college visits, Chris and the team at Salop remain ever vigilant for opportunities to get involved in local activities.

Following this, Salop have forged a strong relationship with the 1st Wem Cub Scouts, also in Shropshire, and had scouts greeted by Councillor Jon Tandy before escorting them and their family members around the factory to look at different metal pressings and coatings.
Cubs were even encouraged to make and bring home their own mementos in the forms of scout badges embroidered with the Salop logo.

Salop additionally invited young people form the Shropshire Youth Health Champions, a group of young people ages 11-25 working to make improve communities, to lend assistance in their current project of brightening up the newly opened Ward at the Telford Hospital.
The group were given a site tour, and then had a brainstorming session with the Salop team to finalise designs and ideas. Salop then fabricated the products and painted them ready for display at the Hospital.

It is evident with the high level of cooperation with the local youth, that Christopher and the rest of Salop are heavily invested in the future of their community and also the industry.

“I see a skills gap”, Chris said, “with manufacturing on the up and with the industry already growing, there are going to be large vacancies for skilled manufacturers in coming years."

Salop understand this and have recently taken on 3 apprentices with the vision of training them up to be fully fledged members of the team upon completion of their apprenticeships.

Eyes fixed on the ahead, Chris thinks the industry needs to consider, with a shortage of skilled workers already emerging, what do we do 5-10 years time? How do we get these kids into engineering?

Chris and the Salop team are aiming to not only strengthen connections with the local community but also to prepare them and themselves for the continued growth and success that manufacturing and engineering are to enjoy in the coming years.
To them, it’s about giving back to those around you and showing the new generation what an exciting career engineering is and will be as they surge on ahead into 2015.

Salop open their doors to the students of Meole Brace Science College, Shrewsbury