RAPRA saved by Made in the Midlands in historic deal 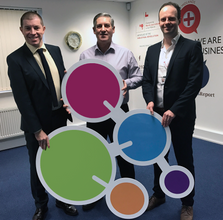 Made in the Midlands have officially saved the Rubber & Plastics Research Association (RAPRA) in a historic deal for the future of the nation's manufacturing sector.

RAPRA are the leading non-profit membership association that offer impartial specialist support to the whole of Industry through a network of world class technical centres. They connect companies to leading polymer scientists and engineers to provide short and long term R&D solutions.

Made in the Midlands CEO, Jason Pitt stated: “It’s very exciting for us to be given the opportunity of acquiring and growing RAPRA, this comes off the back of our expansion into Yorkshire and will help us become an integral part of the future industrial strategy of the UK.

“Although there is uncertainty globally, I don’t think the future of manufacturing and industrialisation is uncertain. With America taking the lead, I expect to see growth in industry, in particular those businesses and sectors that have invested in R&D. The acquisition of RAPRA will help us to deliver that message more powerfully.”

RAPRA encourages modern manufacturing by providing members and clients with unlimited access to an extensive Network of Technical Support. They understand that manufacturing is driven by time sensitive systems which virtually remove any possibility of failures.

RAPRA director, Stephen Shaw explained: “We are very excited and encouraged to see the success that Made in the Midlands and Yorkshire have had in the years that it has been in existence. We are looking forward to working and developing the joint model together in the coming months and years."

Made in the Midlands COO, Charles Addison added: “It is a great privilege to be overseeing part of the stewardship of a historical organization that benefits manufacturing and being able to put a 21st century spin on a membership model, we are using our technology and expertise that has worked for seven years and represents billions of pounds worth of industry in the UK."

RAPRA respond to industry needs, in order to help initiate manufacturing improvements and the introduction of new applications involving polymers. The aerospace and defence supply chains are continuously setting increasingly challenging requirements. By helping companies meet those challenges, RAPRA contributes to the success of the whole sector.

With over 100 years of history, the acquisition of RAPRA by Made in the Midlands signifies a pivotal moment in the development of a future industrial strategy for Great Britain. The continual rise of Industry 4.0 technology will generate increased interest in the services of RAPRA, which will now only be strengthened by the support of Made in the Midlands.