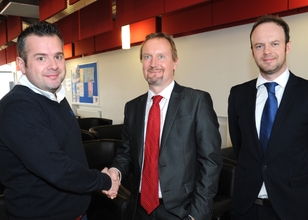 Manufacturing and engineering peer group Made in the Midlands has appointed Chris Greenough and Neil Clifton to head up their Council to help drive the group forward and ensure every member has a voice.

Chris Greenough, MD of Salop Design & Engineering and Salop Powder Coating in Shrewsbury has been involved in the council after joining Made in the Midlands in 2013.

After being appointed as Vice President just under 6 months ago, Chris has worked extremely hard to promote the work of Midlands manufacturing companies and has a passion for helping young people get experience in the industry.

Chris said: “ I attend as many roundtables and as many breakfast meetings as possible, and continue to meet not just great businesses, but fantastic people.

The exhibition last year, was really a turning point for me, the whole atmosphere was of members who wanted to talk, and embrace a culture of working together to make the Midlands the place to do Business. And I can’t wait for this year’s expo in May.

Since joining, and attending the events, I now see the Made in The Midlands as a vision for the future of Manufacturing in the UK."

Chris takes on the role of President from Graham Yeomans, MD of Yeoman Pressings.

Graham commented: “I have thoroughly enjoyed my tenure as President and hope that I have helped in raising the awareness of Made In the Midlands and the good work MIM does in bringing like minded people and companies to work together for the benefit of the people of the Midlands, and also to raise our thoughts to various Government officials of how they can help manufacturing in the UK.

I do believe that Chris will be an excellent ambassador for MIM, and I think through his enthusiasm for raising the profile of manufacturing he will definitely take MIM to the next level!"

Chris will be supported on the council by Vice President Neil Clifton, Director of Cube Precision Engineering, Rowley Regis.

Graham continued: “I would also like to thank Neil for showing his commitment and belief in MIM by volunteering to be VP to support Chris. I am sure they will make a great team and I will continue to support them both and MIM as I continue my involvement at the Council meetings.”

Neil said: “Since becoming a council member, I have been surprised at how little we, as an industry, talk about our success in manufacturing in the Midlands. It was when Cube exhibited at the MIM Exhibition in 2014 that I really felt that other local companies were also beginning to see the growth in the industry.

The Made in the Midlands council acts as a steering group for the members, and council members assist in reaching a consensus and single voice on issues such as commentary on industry and lobbying issues.”

Both Chris and Neil were an integral part of the visit to Westminster earlier this year when Made in the Midlands organised a guided tour of the Houses of Parliament and a private lunch with Vince Cable.

Neil continued: “For me, Made in the Midlands creates a forum to discuss success and learn about how peers have overcome some of the problems our business faces each day. In the role of Vice President I look forward to working with Chris to engage both the patrons and members to highlight the capacity we have in the supply chain in the region. We are also both focused on encouraging young people to understand the opportunities a career in manufacturing can provide."

Chris concluded “Graham has done a fantastic job of heading the council for the last year, his enthusiasm and passion for the region is clear. I would like to take this chance to say “’Well done Graham’

I welcome the opportunity to take on the presidency of the council, and the chance to further get involved in the Made in the Midlands Team, and will bring my enthusiasm to further the cause, and spread the word.”

Charles Addison, Chief Operating Officer at Made in the Midlands concluded:

“Id like to take the opportunity to say Congratulations and wish Chris and Neil the best of luck in their new roles on our council, as well as saying a big thank you to Graham for his continued support and efforts as President over the last 12 months. ”

The next major event for Made in the Midlands is the annual Exhibition, this year held at GTG Training Centre in Wolverhampton on 14th May.

Tickets are free to manufacturing firms and can be registered on the MIM website www.madeinthemidlands.com.