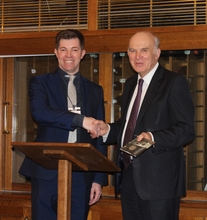 A group of 50 manufacturers travelled to Westminster this week to showcase the very best of Midlands industry.

The trip which was organised by regional manufacturing group Made in the Midlands (MIM) gave fifty ambitions manufacturing and engineering SME’s the opportunity to meet Vince Cable and demonstrate the diversity of Midlands manufacturing talent as they put their views across to Westminster officials.

As well as a tour of the Houses of Parliament the delegates were given a private reception with Vince Cable, Secretary of State for Business and Innovation, and had the opportunity to speak about some of the issues facing the sector such as skills, funding, export and public perception of the industry.

Made in the Midlands Chief Operating Officer, Charles Addison, said: “We have taken our members to meet with government previously but this is the first time we have been able to bring such a large group on a trip like this and the feedback has been incredibly positive. We are passionate about giving local firms a louder voice and visits like this are a massive part of that – this was a major show of strength for the Midlands.”

The visit coincided with the 50th Anniversary of the death of Sir Winston Churchill and members were given refreshments in the Churchill Room. To celebrate Churchill’s life and legacy and considerable achievements during the Second World War, the Made in the Midlands team presented Vince Cable with a commemorative Churchill coin.

Lorely Burt, MP for Solihull, has been involved with Made in the Midlands after speaking at the MIM awards in October 2014. It is Lorely’s support for Midlands manufacturers and connections with Vince Cable that made this trip possible.

Birmingham City University and the Manufacturing Advisory Service supported the trip, and have both been strong advocators and partners of MIM for many years.

Joanna Birch, director enterprise, innovation and business engagement, Birmingham City University, said:
"Birmingham City University has a long established track record of working with leading Midlands firms to facilitate design led thinking and help them innovate. Working with partners like Made in the Midlands is an important part of our work in celebrating Birmingham's industrial design credentials."

Richard Lowe, Operations Manager for the Manufacturing Advisory Service in the West Midlands, commented: "The Westminster visit was a great way for us share the entire day with 50 SME manufacturers, talking to them about the opportunities they can exploit and the challenges they face.

"This helps MAS to understand how we can tailor our support so that it continually meets their needs, whether that be through strategy, process improvement, developing new products or assistance with making supply chains more efficient. Now we are part of the Business Growth Service, we can also offer even greater assistance with access to finance, intellectual property protection and design."
"You could tell the manufacturers enjoyed meeting Vince Cable and hearing his passionate thoughts on how the Government will continue to help them grow and create jobs."

MIM has strong links with Government and group members have previously met and interacted with George Osborne, Nigel Farrage and Nick Clegg in the past year helping them to understand the changing needs of industry.

Made in the Midlands, the privately run peer group for MD's and CEO’s has over 270 members from manufacturing and engineering companies across the region and helps to give a louder voice to the sector.

The MIM members with Lorely Burt MP and Vince Cable