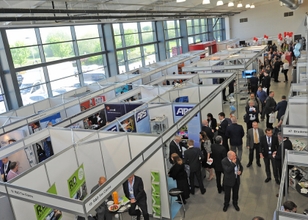 Over 2,000 decision-makers from the Midlands manufacturing sector are set to attend the biggest ever Made in the Midlands exhibition in a fantastic representation of post-Brexit solidarity and positivity from Midlands industry on Thursday 25th May.

Following the historic Brexit vote, Made in the Midlands made the decision to move their exhibition which showcases the best of Midlands industry to the world-class Ricoh Arena. Since Brexit, their members have seen an increased shift in companies reshoring their business.

Made in the Midlands CEO, Jason Pitt stated: “It has been fantastic to see that there are so many innovative people here in the Midlands following Brexit. The vote caused a lot of confusion amongst people, yet manufacturers have seized the opportunity to strengthen their ties locally and create new business. We now expect over 2,000 people to attend our biggest ever event.”

Cannock-based pressings manufacturer, SMB Pressings have experienced a wealth of positive change since the Brexit vote. Through continual business investment, SMB have purchased state-of-the-art Laser Cutting and CNC Press Brakes to improve their service offering. Since then, SMB have responded to a record number of enquiries which has resulted in a high sales order conversion rate.

Managing Director of SMB Pressings, Alec Proctor explained: “It is absolutely essential for everybody to work together, especially Midlands manufacturers. To welcome 2,000 visitors to the exhibition is a fantastic achievement and just shows the scope if everybody continues to work together."

The combined turnover of industry-leading manufacturers that will be in attendance at the exhibition is set to eclipse £4 billion. Industry powerhouses such as MAHLE Powertrain, Liberty Pressing Solutions and I M Kelly Automotive will all be exhibiting at the show for the very first time.

General Manager of Subcon Laser, Tom Mongan explained: “I think there is certainly an emphasis from what I have seen in the past 12 months on reshoring with big pushes from companies to look at what is available within the UK as the Midlands has world-class manufacturing facilities.

“I think it's a phenomenal achievement that 2,000 people will be attending the exhibition and it just shows the confidence in manufacturing and that people are taking the time to come and see what people are doing here in the Midlands.”

Wolverhampton-based pressings manufacturer, Yeoman Pressings’ sales have exceeded their budget month by month by 15-20% since the Brexit vote. The company also announced their biggest turnover for December in the history of the company with a 35% increase.

Commercial Director of Yeoman Pressings, Graham Yeomans concluded: “Having spoken to several other manufacturers, they all had the same story about being the best December on record. I understand that the cost of importing goods into the UK have increased by approximately 20%, but this I see this as an opportunity for looking at growing manufacturing within the UK rather than importing. This has got to be good for jobs and being more self sufficient.

"I believe that there will be a lot of interest in the Made in the Midlands exhibition by potential customers who are looking to more local, cost effective and efficient supply partners and the exhibition will deliver that.”