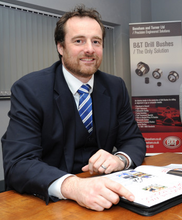 Donald Trump has been elected as the 45th President of the United States of America. Trump has previously been quoted as stating: "Britain would not be at 'back of the queue' for a US trade deal if it quits European Union."

Made in the Midlands polled manufacturers on how they felt about the US public's decision, the potential impact to the global economy and the impact it may have on their business in the UK.

Boneham Metal Products are a sister company of Boneham & Turner Ltd (UK), the UK’s leading Drill Bushing manufacturer. They have firmly established a reputation for quality and reliability in the supply of high precision Inch drill bushings, Metric drill bushings, and dowel pins.

Managing Director of Boneham and Turner, Charles Boneham reacted: “If I was a US citizen I would have voted for Donald Trump, even though like a lot of the US I don’t seem him as perfect. I believe that this is the result of the US population (similar to the UK with Brexit) who are tired of self-righteous, arrogant politicians and media who have forgotten that they are there to serve the electorate and not the other way around. Personally I am glad to see someone go into the White House with business experience, who is not a politician.”

“Because we do a lot of business with the US it’s never ideal when the dollar weakens. However, I think this will be short lived and in the long-term I expect to see a lot of manufacturing return to the US which hopefully will bring new opportunities to us. Also, Donald Trump who is pro the UK has said that we will be at the front of the queue with any trade deals.”

Threeway Pressings export products worldwide and Managing Director, Phil Stanley said: “I think the result is the same as Brexit, the people are fed up with politicians and they have had enough of state control to the degree where they are losing manufacturing and jobs. I think Trump is a businessman, so he will make the right decision with regards to the trading with the UK. He will make his decisions for business not for politics.”

Salop Design and Engineering Director, Christopher Greenough explained: “It is a momentous decision that the American public has taken. He would not have been my vote, but neither was Brexit. Trump needs to formulate a plan before he actually moves into the White House, I’m sure that he will have a lot of policy writers behind him.

“I think he will be looking for our special relationship to continue and now we are not in Europe, that actually puts us in a better place. I think regardless of who was elected, the UK would have been at the front of the queue on any trade deals.”

Bracebridge Engineering Limited are a family owned business based in the West Midlands that was established in 1978 as sub-contract supplier of metal pressings. Operations Manager, Luke Parker concluded: “People are just fed up with the status quo, they want change and a fresh way of looking at politics and this has been reflected in the vote we have seen. I want to see change in the way politics is handled and done and I think if anyone will do that it will be Donald.

“For the UK, he is a pronounced Brexit supporter so I can only hope that this will help strengthen trade deals and make trading with the US much more attractive, and I would say Donald will now see the UK as an excellent stepping stone into the European markets.”