Manufacturers react to Hammond's pledge of £392m to Midlands Engine 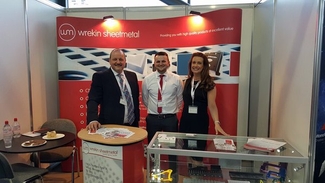 Wrekin Sheet Metal at the Made in the Midlands Exhibition

Midland manufacturers have continued to react to Philip Hammond’s recent pledge of £392m to the Midlands Engine Strategy from the Local Growth Fund.

Leading manufacturers from the Made in the Midlands manufacturing and engineering peer group are hopeful that the government can deliver on their proposed strategy.

Managing Director of Laser Process Limited, David Lindsey stated: “The Midlands is a great engine for potential growth in the UK. We have got the expertise and the available infrastructure but we do need help.

“If the government mean it and the money is distributed effectively then it is a great strategy but history is not on their side.”

Laser Process Limited are a leading laser subcontractor formed over 25 years ago based in Cannock, Staffordshire. The Staffordshire region’s Local Enterprise Partnership (LEP) will be given £23.30 million to strengthen the region.

Alternatively, the Greater Birmingham and Solihull region has been allocated over double that amount with £54.20 million. Sales Director of Birmingham-based powder coating company, Frederick Cooper Ltd, Jon Stone stated: “The Midlands definitely has massive economic potential, so I think that any financial support should be welcomed.”

The Marches LEP will be allocated £21.91 million in new funding and Hereford’s new university has secured at least £8m of start-up funding. The New Model in Technology & Engineering aims to support business innovation and commercialisation. However, some manufacturers remain uncertain that they will see any of the financial support proposed by Hammond.

Sales Director of Wrekin Sheet Metal, Simon Orpe argued: “I think it is very encouraging for us manufacturers if that is going to happen. Do we see any of it? We have seen a lot of money pledged for manufacturing previously, but we never see any of it, as there is too much red tape to access it. At the end of the day, will it benefit us? I very much doubt it. It would be better if they could show us how we can benefit from it.”

The money also includes £25m which has been assigned for tackling congestion and improving major employment sites in the Black Country. Hammond delivered his speech in Dudley and stated: “The Midlands has enormous economic potential and as we lay the foundations of a stronger, fairer Britain outside the EU it is more important than ever that we now build on its existing strengths to make sure it fulfils it.”

Walsall-based Westgate Group are leading UK stainless steel suppliers, stockists, distributors and processors. Director, Gary Mountford responded: “Obviously, the Midlands does have potential given the industrial manufacturing background of the area. I think the Midlands has been underfunded for many years now, so the local workforce would be ideal for that sort of investment. I think it is a good idea for the investment in the Midlands to take place.”

Wrekin Sheet Metal at the Made in the Midlands Exhibition