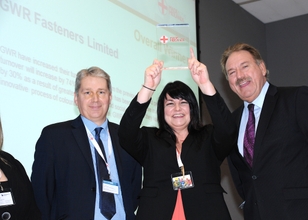 The seventh annual proceedings of the Made in the Midlands Awards took place on 29th October at the IET Birmingham: Austin Court to recognise the outstanding achievement of the manufacturing heroes in the Midlands.

This year’s award ceremony was presented by Professor Kevin Morley, who is renowned for being the former Managing Director of the Rover Car Group. Five years after his appointment as MD at Rover Group, the company had a turnover of £3.2 billion.

Morley produced some incredible anecdotes for the audience to help inspire all of the local manufacturers in attendance. Morley said: “If everybody in this industry from the top to the bottom took a vow of excellence within their company they would be successful and they couldn’t fail.”

This year’s esteemed winners of the 2015 Made in the Midlands Awards were Oswestry-based manufacturer of special fasteners and precision components GWR Fasteners.

GWR’s Commercial Director Jude Robinson said: “I am absolutely overwhelmed because our peers and the judges have no doubt more experience than us and have seen something in us to give us this recognition. I just feel honoured and humbled by it all.”

GWR have increased their turnover by 29% since the previous year and predict that their turnover will increase by an estimated 74% in 2015/16. There has been increase in their manufacturing orders by 3000% as a result of greater focus on search engine optimisation and social media and they have developed an innovative process of colouring stainless steel in GWR Colourfast.

Following such an astonishing achievement, Robinson summarised GWR’s journey: “I would say as a company, we started from nothing and didn’t receive any help for the first five years so we’ve battled away and become a financially viable company to attract investment. But we think that one of the proudest moments for us was getting new CNC machines in January last year so we are now fully fledged manufacturers that are still growing and still adding machines to our factory.”

The future certainly looks bright and youthful for GWR, as Robinson concluded: “I think we’ve realised one dream by getting the new CNC machines in. But another dream of ours is to look at apprenticeships because we struggle with finding people with the skills that our manufacturers have got. That’s what we’re going to be doing in the future.”

The entire purpose of this year’s Made in the Midlands Awards could be summarised by COO Charles Addison who finalised the proceedings: “We feel you are the manufacturing heroes who are here to drive our economy forward.” These awards are continually growing towards becoming a cornerstone in the recognition and celebration of manufacturing success in the UK.